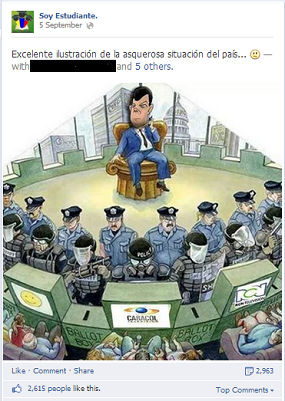 On Colombia’s largest TV news source Caracol there is a segment called ASI SE MUEVE LOS REDES or THIS IS HOW NETWORKS MOVE which parades tweets that are trending and memes making rounds around social networks.

In the midst of the nation wide protests that gripped the country for three weeks this segment became a tool to whitewash what was really moving on social networks and manufacture consent to conform with claims deliberately belittling the size of the protests.

The most famous claim was when President Santos stated “this national strike does not exist.” which set off a tidal wave of memes and even youtube videos that rippled around social networks.

Despite getting thousands of shares none of them made the cut for Caracol TVs social media show so we decided to compare some with those that did.

The following memes, tweets, and Facebook images were selected on September 2nd and compared with Caracol TVs selection for the same day. A more scientific comparative analysis would compare tweets with tweets and Facebook with Facebook but we believe the programs unprecedented focus on just twitter was because this network took second place to Facebook during the strikes.

CARACOLS CHOICE: The first pick on Caracols THIS IS HOW NETWORKS MOVE is a North American businessman who paid to promote various irate tweets in English against British Airways when they lost his fathers luggage.

@BritishAirways @British_Airways is the worst airline ever. Lost my luggage & can't even track it down. Absolutely pathetic #britishairways

CHEKHOVS CHOICE: With over a thousand more shares and likes that same day we have picked an image and quote of Cesar Pachon, a potato farmer from Boyaca who led the protests in the province and states: “We are capable of making a house, we dont need them to give us one, with our own work we are capable of buying it. Dont worry about food because we are capable of feeding this country” – translation: we dont need welfare, we need just policies that don’t bankrupt farmers. 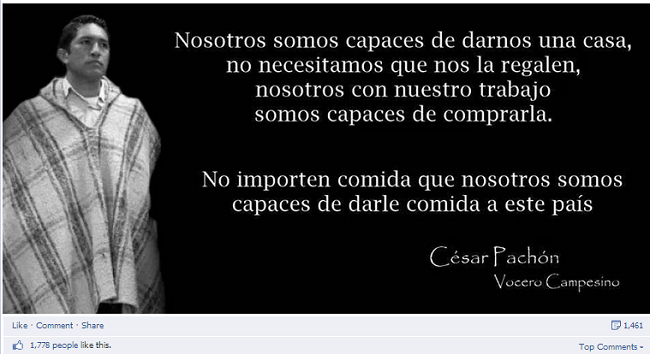 CARACOLS CHOICE: Next up on the program was a cameo from Caracols favorite post-Chavez-punching-bag, Nicolas Maduro, showcasing the Venezuelan Presidents announcement over twitter who is now tweeting English, French, and Portuguese to accompany his mother tongue.

Now my tweets are available in English, French, Portuguese and Arabic, to tell the world the truth of the homeland of Bolívar and Chávez

Caracols social media team then scoured twitter to find a mildly popular meme taking the piss out of Maduro the Polyglot´s letter to Obama:
“TUBAZOOOOO OBAMA RECEIVES THE LETTER FROM THE POLYGLOT @NicolasMaduro”
https://twitter.com/THELAWYER41/status/374925770054852609 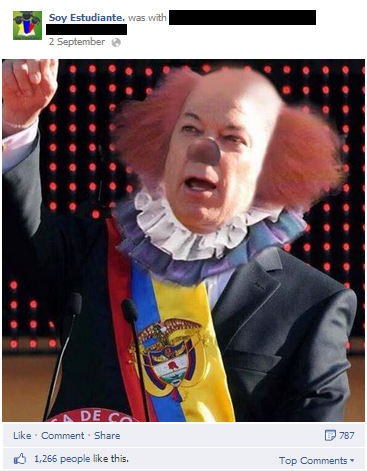 CHEKHOVS CHOICE: The same day an image with 1,266 likes 786 shares of President Santos looking like the psychopathic clown from Stephen Kings IT appeared.

Two days after September 2nd a Gallup poll put the approval rating of President Santos at 21 percent down 27 percentage points from the previous poll.

The Wall Street Journal called it “the lowest level recorded for a Colombian president for more than a decade” which may be worrying news for the editors at Caracol as Juan Manuel Santos enters an election year. 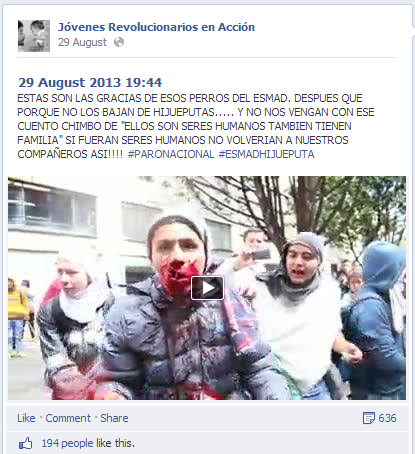 Analysing social networks inside Colombia during these strikes and its obvious that much of the citizen journalism documenting the police and ESMAD brutality originates on Facebook.

These photographs and videos are uploaded by individuals (students, youths, professionals) and make ripples around their respective social networks until they are picked up by larger Facebook groups like Young Revolutionaries in Action.

These larger Facebook groups are also becoming the first point of contact for many citizen journalists seeking a wider reach for their photos and videos of the protests.

That means Facebook groups like Soy Estudiante, Jovenes Revolucionarios, and Red Boyaca are becoming the primary source for unfiltered news for many Colombians irrespective of their demographic and location.

Given that the size of each of these platforms grew exponentially during the three week protests the Colombian government may already see them as a threat to controlling the narrative over the mainstream communication mediums.
[mc4wp_form]

When Colombian police discovered a military grenade on terminally ill

Its not every Sunday that the priest of a rural