For Chekhovs Kalashnikovs very first interview on Change Makers we will be talking with environmental activist Chris Canaday from California about the broken and dangerous state of human and water sanitation systems and the solution to this problem that is damaging our environment and health. 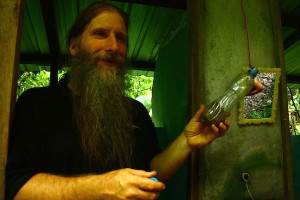 I think that, before we talk about this revolutionary sanitation system, it is important to touch on why the current system is broken. Can you elaborate on how the contemporary western toilet came into being and the devastating effect that it has had on the environment and our health?

People in Europe used to live in total filth in their cities, throwing their excrement out the window. Porcelain flush toilets had been worked on for some time, but only in 1861, after her husband had died of fecally transmitted typhoid, Queen Victoria ordered flush toilets to be refined and installed in much of Britain.

It is also reported that she was so obese that she had trouble squatting and someone decided that it was not dignified for the queen to squat. They gave her a new porcelain throne and then, via mass psychology, all the Western World has wanted the same thing as the queen of England, even if it is not good for them or their environment.

The modern flush toilet has contributed greatly to the cleanliness of cities, but has not really solved the problem, just moved it farther away. Water always gets recycled and there are always more people living downstream. Developed countries spend millions and probably billions of dollars trying to clean up their wastewater, but never really succeed.

The modern flush toilet is largely based on the concept of “out of sight, out of mind”. It is also a prime example of selfishness: cleaning up the environment close to the user, while contaminating everyone’s general environment.

It is interesting to note that at the same time that Water Closets were being developed, Earth Closets were, too. There was even one reportedly used in Buckingham Palace for a while. Over time, Water Closets won out as the standard for Modern Western Society, likely due to their ease of use and maintenance, as long as piped water comes to the house and sewage goes away.

Another key way in which the current, water-based sanitation system is “broken” is that it is based on the illogical, unsustainable and linear concept that natural resources should be used once and then thrown away. Flush toilets not only throw away huge amounts of water, but also all the nutrients found in the excrement.

With a simple push of a lever, we effectively deplete our agricultural soils and contribute to the eutrophication of rivers, lakes and oceans and in them the formation of hypoxic dead zones.

If these nutrients were instead given back properly to the soil (and if the population were stable), we could forget about the non-renewable, unsustainable chemical fertilizers that are currently the basis of Modern Western Society’s food production. Those who learn to recycle these nutrients in an orderly way now will have every advantage in the future when these chemicals run out, and when there are possibly 9 billion people on Planet Earth, all wanting to eat.

Water is so essential and vital that we simply cannot live without it. Nonetheless, modern homes in developed countries dump between 25 and 40% of their water down the toilet, and the number engineers use in Ecuador is closer to 75%, given the high incidence of unmaintained toilets through which water flows constantly. We need to promote a culture of respect for water, as a source of life, which should never be treated as a garbage dump.

If these are not enough reasons to consider the current water-based toilet to be broken, obsolete and illogical, please consider the following unreliable, unhygienic and not-so-easy aspects of flush toilets:

In the interest of full disclosure, flush toilets can be somewhat ecologically and socially sustainable in places where water is abundant, human settlement is dispersed, and the soil is absorbent, such that septic tanks (for settling out the solids) and leach lines (drain fields; for allowing the contaminated water to absorb into the soil) can work properly, at more than 16 meters from wells or streams, and if the septic tank sludge is treated in reedbeds.

Constructed wetlands are also important tools for treating wastewater, but they require a fair amount of land. On top of this, who knows how far all the different modern synthetic chemicals can travel in the water and the soil? So, in summary, it is most prudent to not mix our excrement in water from the beginning, especially if we have large numbers of people grouped together in a city.

So the reason Colon Cancer is skyrocketing in the Western World today is because we aren’t completely clearing our bowels, thanks to a custom-made invention for a morbidly obese queen?

Yes, and not just colon cancer, but also constipation and hemorrhoids. The natural position human beings have used when defecating, over millions of years, since before we were people, has always been squatting. In this position, the outlet is straight and the body can eliminate its waste more easily, efficiently and completely. When sitting, the outlet is not straight, certain muscles contradict each other, one needs to push more, and not all of the feces come out, so there is more constipation, hemorrhoids, and the colon never gets a rest from being in contact with festering feces, causing a greater incidence of colon cancer).

Squatting has the added advantage that it is more hygienic, especially with respect to women, since the user’s private parts do not touch anything. (Most women apparently never actually sit on a public toilet, but actually sort of hover above, which is much more uncomfortable than squatting all the way down.) Also, the squatting position is more accessible and intuitive for little children, since the floor is the same height for everyone, while a toilet bowl made for adults is much too big, uncomfortable and unsafe for them. Furthermore, in Urine-diverting Dry Toilets (UDDTs), the squatting position allows for a more certain separation of the urine and the feces, plus it is easier and cheaper to build.

In Ecuador, where does all the sanitation waste go? How much water is used and what effect does this have on the environment?

Almost all of Ecuadorian cities’ wastewater goes straight into rivers or bays, except for Cuenca, Shushufindi, and a few other cases where wastewater treatment is done.

The amount of water is huge and the excrement’s nutrients fertilize algae that end up dying and thus consuming the available oxygen in the water, creating the eutrophication and hypoxic zones mentioned above. But the biggest threat is that of pathogens in the water, which are responsible for the majority of disease in the world.

Many people have daily contact with rivers, for bathing, washing clothes or drinking, even only minutes after others have defecated in it, so it is obvious how disease can proliferate. Need more proof? Check out this:

I can just imagine the collective shit and piss from the hundreds of thousands of people living in Ecuadorian cities like Coca, Tena, and Puyo flowing into these Amazonian Rivers. What I find scary however is that this problem is not confined to Ecuador or even the South American Amazon but is worldwide.

What happens to communities that live on river banks, lakes, and areas prone to flooding with respect to worms, bacteria, and water-bourne diseases, like cholera that can be prevented with this system?

Yes, it is a discomforting thought, but the volume of shit is actually much greater if we remember that the millions of people who live in certain Andean cities in Ecuador, including Latacunga, Ambato, Riobamba, Cuenca, and Loja, also dump their waste into Amazonian rivers. Unfortunately, as you say, this situation is all too common in the world, where 90% of wastewater goes into the environment without proper treatment.

Even in countries like the United States, where things are presumably all under control, there are thousands of “sanitary accidents” every year, in which untreated sewage goes straight into the environment.

There are also numerous pharmaceuticals that cannot be removed from the water via conventional methods, such as antibiotics, antidepressives, and artificial hormones from birth control pills.

In addition, the current system of trying to kill the germs in the water with chemicals in one city, and the next downstream, and the next downstream, is a recipe for these germs to get resistant to these chemicals, especially if at the same time people are drinking and bathing in other peoples antibiotics. This has generated multiresistant strains of microbes that we cannot kill with chemicals to heal the people who get sick with them , nor can we be sure to disinfect a swimming pool even by adding chlorine.

In terms of health, the worst thing about flooding is that everyone is in everyone else’s shit.

This is an even bigger problem on the coast of Ecuador, where huge areas get flooded, with millions of people being affected, and it is getting worse with Global Climate Disruption. Urine-diverting Dry Toilets (UDDTs), on the other hand, can simply be built above the highest level of the flood waters.

One of the scariest results of all this fecal contamination, aside from diarrhea, typhoid, cholera, poliomyelitis, hepatitis, and other microbial diseases, is the high incidence of roundworms of the genus Ascaris, which infect about one-seventh of the world human population . There is a reason that the word for disgust in Spanish, “asco”, is so similar:

In Part 2 of this article Chris Canaday will tell us about the solution to human waste disposal and how it will solve much of the planets sustainability problems.

"While the heavily-armed Waorani scoured the jungle to exterminate the uncontacted Taromenane tribe, leading Ecuadorian officials

"At the end of march this year, 2013, in the jungles of Ecuador's northern orient, a

"While the heavily-armed Waorani scoured the jungle to exterminate the